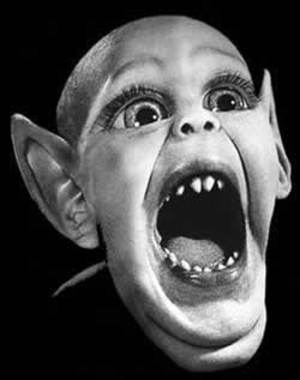 It grieves me to report the death of the most widely viewed sci-fi publication in the US. I refer of course to the Weekly World News, which since 1979 has graced check-out lanes in supermarkets across the country with tales of alien celebrities, undead politicians and everyone’s favorite, Bat Boy.

Edited of late by the prolific Jeff Rovin, author of various movie-tie in novels as well as genre surveys like The Pictorial History of Science Fiction Films and Encyclopaedia of Supervillains, the WWN was founded with a mandate somewhat less noble than, say, The New York Times: the owners of the National Enquirer, which has just gone to all-color, wanted some way to use their outdated black-and-white press. When I got a job with the Enquirer in the late 80s, I looked forward to meeting the WWN staff, only to learn that it wasn’t something the corporate guys were particularly proud of.

In recent years, the WWN pretty much stopped pretending to be anything but fictitious, while toning down the once-outrageous bile of columnists Ed Anger and Dear Dotty. Shrunk to a fraction of its former tabloid glory (with an inflated price of $2.99), it was no longer worth reading. It will continue on in its online edition. But I’m sure going to miss seeing its luridly imaginative covers as I wait to pay for my groceries: in a sea of interchangeable tabloids and magazines hawking the same meaningless gossip about the same two or three “celebrities” every week, those B&W headlines screaming “Aliens Abducting Bathing Beauties!’ and “Exclusive Report: Inside the Gates of Hell!” were a breath of fresh air.