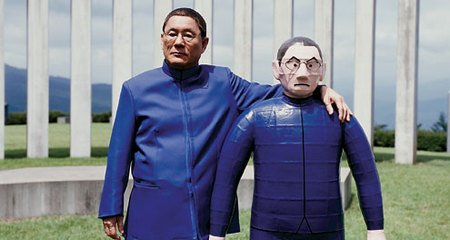 The odds are slim to non-existent that you’ll ever get a chance to see it, unless you buy imported DVDs online, but I have to tell you about this berserk movie I’ve just seen at the Toronto Film Festival. (That’s one of the big reasons why I come here, for movies I would never otherwise have a chance to see, at least not in theaters).

Glory to the Filmmaker is a new film by Japanese cult figure "Beat" Takeshi Kitano, who made an international reputation with a series of berserk gangster films and then decided to retire from the genre. This new movie parodies his desperate search for a new kind of film to make, from period dramas to Hollywood-friendly horror movies.

OK Faust, I can hear you saying, but why are you posting this in Scanner rather than the Obscure Japanese Cult Icons blog?

Because halfway through Takeshi decides to make a CG-driven science fiction epic. Except that he can’t focus his attention on his story about an asteroid on a collision course with Earth (sound familiar? That’s the point) and keeps wandering into other areas.

What starts out as a relatively cerebral satire – parodying films by Yasujiro Ozu is not the kind of thing your average audience is going to yuk it up at – soon gets extremely silly, with computer effects that look like something a 13-year-old designed in his first computer class and jokes that will keep your average 7-year-old chortling – especially if he’s seen The Matrix and The Terminator.

And just when you think Kitano has been making it all up as he went along, the asteroid comes back at the end to wipe everyone out! (Trust me, I’m not giving away anything here.)  I have to admit that the less sense it made, the more I laughed. It’s not impossible that it might come out in the US on DVD, though I warn you – it’s the kind of movie you either love or hate.