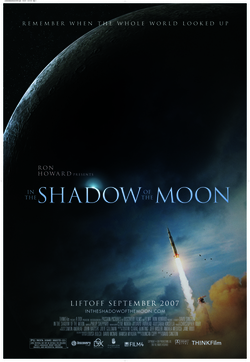 If your town is lucky enough to have a theater that specializes in "arthouse" films, keep an eye out for In the Shadow of the Moon. This British documentary, winner of the Audience Award earlier this year at Sundance, concerns a subject that  has inspired many science fiction films over the years, man’s yearning to visit other worlds. But this film looks at the men who actually did so, the surviving astronauts who walked on the moon as part of the Apollo space missions from 1969-1972. With no political agenda, director David Sington simply memorializes the accomplishment in a way that seeks to recreate the wonder we felt in a less jaded time. His interviews with the Apollo astronauts show them as warmly iconic men in their 70s who remain awed at the experience they shared. Their reminiscences are accompanied by restored footage taken on the space missions, some of which have never been seen. It’s a reminder of what made many of us so interested in science fiction in the first place.