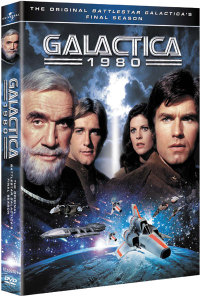 The original Battlestar Galactica was:
(A) Television’s attempt to capitalize on the Star Wars phenomenon.
(B) A clever scheme by Lorne Greene to revitalize his career.
(C) A warm-up for the spectacular Galactica 1980.

For those who missed it and have been waiting for the short, sharp shock that only lousy crapfests can bring, TVShowsonDVD.com tells us that the long wait is finally over.  On December 26th, Universal Home Entertainment will release the complete Galactica 1980 series on DVD for just under 30 star bucks. All 10 episodes will be included.  Lucky you!  I stopped at one.

The kicker for this DVD set is the brilliant (see the aforementioned note on marketing weasels) tag line "The Original Battlestar Galactica‘s Final Season".  Come again?  The show was created by a fan write-in campaign after the original Battlestar Galactica was canceled into the ether.  Not the same thing, especially when you turn the show upside down and introduce a whole new level of suckage whose ripples would be felt through the sci-fi community for decades to come.

The premise of Galactica 1980 was that, a generation after the first series and long enough for Commander Adama to grow a beard, the fleet arrives at Earth, only to find its inhabitants ill-suited to defend themselves against the Cylons.  Oh, and there were flying motorcycles, Cousin Oliver from The Brady Bunch, and recycled footage from Earthquake.

Hmmm…Lorne Greene was in Earthquake.  Maybe the correct answer to the Pop Quiz is (B) after all.

The Final Season of Battlestar Galactica? Um, No…  [Simple Tricks and Nonsense]