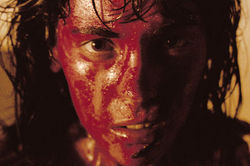 The French’s long standing argument that Americans are too violent is now officially tossed out the window thanks to the new French horror film Inside, which screened Tuesday night at Fantastic Fest.  In fact, after this and Haute Tension, I think we might want to start getting concerned about all that wine the French consume.  Inside is truly that violent.  In fact, it’s quite possible this is the goriest film of the decade so far, and that’s saying something!

Inside is true grand guinol of the highest order, a veritable symphony of blood and death that is going to take some time for any other filmmaker to top.  And like most other grand guinol, it’s pretty much just a big joke, outrageously over-the-top and impossible to take seriously.  Considering the lengths that the film goes through with its violence, that is actually a very good thing indeed.

Inside stars Alysson Paradis as a pregnant woman about to give birth whose house is invaded on Christmas Eve by a mysterious woman (Beatrice Dalle) out to kill her and her unborn child.  That’s all you need to know and about as much of the plot as you’re going to get anyway.

In the movie’s 90-minutes, directors Alexandere Bustillo and Julien Maury drench every single character that comes across the screen in blood (usually their own).  For a small, low-budget film the body count is incredibly high, with a mortality rate that has to be the highest since Ten Little Indians.

The film contains a tremendous amount of violence perpetrated toward a pregnant woman and that’s usually a big no-no with me, but Inside is simply way to ridiculous to be offensive.  There is so much blood and so much death that you’ve got to roll your eyes and say, "OK, you’re joking, right?"