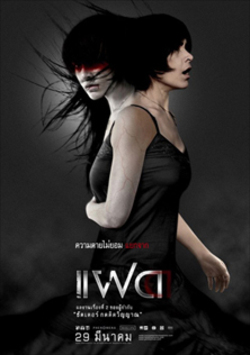 OK, Monsterfest readers, take a guess as to how the following film ends: A beautiful young woman returns home after many years and is haunted by the ghost of her dead Siamese twin.  In the course of the film it is revealed that both sisters were in love with the same man, who loved one but not the other, and that one of the two sisters then became obsessed and jealous.  So what do you think is the terrible secret behind this mysterious haunting?

The problem with the new Thai horror film Alone is that once the premise is established, the ending then becomes pretty obvious.  To quote Michael Shelly, I guess I’ve seen too many movies, but this left the film with a distinct lack of any surprises and when you’re working in horror, the surprise factor accounts for about 90% of success.

Although it’s a well-produced, good-looking film with (admittedly) one
or two scares, I was distinctly unimpressed, unlike my good pal and
Fantastic Fest programmer Zack Carlson,
who thinks it’s one of the best horror films in years.  Just so you
know that there are differences of opinions on this one.  Additionally, I really don’t like it when movies resort to
killing animals to try and scare you (though the killings are fake) and
Alone does it twice.  Sorry Zack, but you’re all Alone on this one.