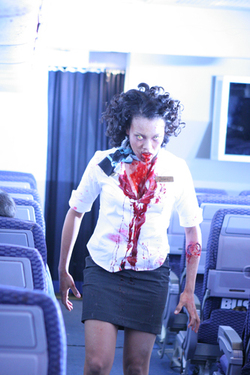 The unwritten law of film festivals is that you’re going to have to sit through some stinkers in order to get to the good stuff, and Fantastic Fest’s first loser (for me) was Flight of the Living Dead.

Coming out on DVD next month with the subtitle Outbreak on a Plane (distributor’s New Line Cinema’s attempt to link the film to Snakes on a Plane), Flight of the Living Dead takes a simple Sci-Fi channel movie premise (experimental virus being carried illegally on a trans-continental flight breaks out and turns the passengers into raging zombies) and doesn’t really deliver on its goofy promise, just like Snakes on a Plane.  When a movie gives you the glorious idea of a plane full of zombies (seriously, doesn’t that sound cool?), what happens on that flight had better be equally outrageous.

Take most of the airline movie cliches (bickering couples, mile-high
club members, nuns, federal air marshals) add zombies and simply put
them through the motions and you’ve pretty much got Flight of the Living Dead.
Heck, even a lot of the gore FX, while well-executed, felt routine
(when you see a zombie being stabbed with an umbrella, you know what’s
coming next).

Flight isn’t terrible by any means and if you’re just looking
for a gory rental, you could do worse.  But when a low budget picture
like this ends up getting trumped by a tiny micro-budget, DIY film like
Five Across The Eyes (more on that one later), you’re reminded that inspiration has to be backed up by imagination in order to work.