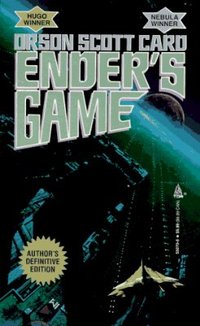 There has been talk about making a movie version of Orson Scott Card’s Hugo and Nebula Award-winning book, Ender’s Game, for years.  While there is no definite schedule yet, IGN reports this week that Wolfgang Petersen has confirmed that he is indeed still attached to direct it.

Peterson (whose directing credits include Enemy Mine, Outbreak, Poseidon and Troy) was quoted at a press junket saying, "I’m just, at the moment, developing three science fiction films. Two for Columbia. The Grays, based on Whitley Strieber’s book. The other is called Uprising. And the other is Ender’s Game."  Peterson also said that Ender’s Game is "a very, very tricky adaptation and an incredibly fascinating concept, but I still think that one day, I will do Ender’s Game. I just recently had a meeting with Orson Scott Card. But we’re hanging in there and, yes, we will do that picture."

Cool!  That sounds like a definite confirmation of potential plans to maybe someday get the film possibly done.

IMDB lists the movie as being in pre-production, but I’m just not getting the warm squishy feeling I get when I hear that a book I liked is getting the film treatment. Ender’s Game is, of course, just the first book in that series that also includes Speaker for the Dead, Xenocide, Children of the Mind, Ender’s Shadow, Shadow of the Hegemon, Shadow Puppets and Shadow of the Giant.  Not all of those books are direct sequels, mind you; some tell the same story from a different character’s perspective.  I’ve read the first few books and they are quite different than Ender’s Game, so, for readers looking to press on into the sequels, you are hereby warned.

If they do film Ender’s Game, I believe that they will get the benefit of a larger-than-normal built-in audience.  Unlike other adaptations which have only the science fiction fanbase to rely upon, Ender’s Game is on the reading list for many schools across the country.  It’s likely that many more people have been exposed to the book than would have been otherwise, had they not been "forced" by their school curriculum.  Kids today…they don’t know how good they got it.  <grumpy voice>In my day, they force fed us Wuthering Heights until we couldn’t breathe and we liked it!</grumpy voice>  Or, not.