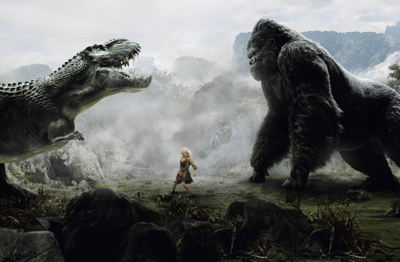 Here’s a deleted scene I’d like to see, from Peter Jackson’s King Kong.

End of ACT II. Carl Denham talks to Captain Englehorn as they journey back to New York, from Skull Island.

CARL: Good job getting that giant Ape aboard the ship!

CAPTAIN: Thanks, Mr. Denham. Boy, I can’t wait to get back to the Big Apple and tell everyone about those dinosaurs!

CARL: Yeah, about that… If people learn that we’d encountered dinosaurs, it might make Kong seem a little less…impressive.

CARL: I know, but the Broadway theatergoers will have just paid 20-bucks to see a monkey – if they find out they could’ve seen a T-REX, they’ll feel cheated.

CARL: I know, I know, the dinosaurs are a major scientific discovery. But theater critics are totally unsympathetic about that sorta thing. So let’s just never mention the dinosaurs again.

CARL (to a crew member walking by) Hey, you!

CARL: We sure did a hell of a job capturing that ape, huh?

CARL: Too bad we couldn’t snag any of those dinosaurs.

CARL: Yep. There were a whole mess of dinosaurs on Skull Island.

CREWMAN: Wow! That changes everything we know about evolution and the extinction of species!!! Dinosaurs! (calling to another crewman) Larry, did you hear? There were dinosaurs on that island where we got the ummm…

CARL: But for the purposes of our Broadway show, we must never speak of the dinosaurs again.