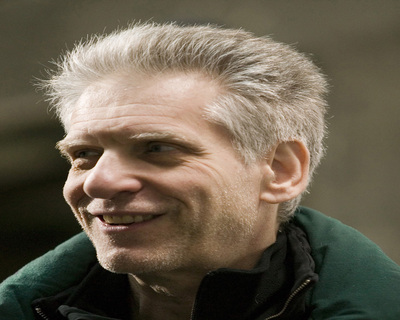 Operating for much of his early career in the nexus of horror and sci-fi, culminating in his brilliant 1987 remake of The Fly, David Cronenberg has always been concerned with the fragility and will to live of the human body. In an interview at the Toronto Film Festival, where he was promoting his new film Eastern Promises, I asked Cronenberg if he feels any responsibility for the current crop of horror movies that linger on torture and pain.

“Absolutely not,” he answers. “I’m guilt free. I haven’t seen Saw or Hostel or any of those. But …

“People ask me, do you think people are desensitized now? I’ve been hearing that for 40 years. In fact I think they’re much more sensitive to violence now than they ever were before because it’s coming close to home. Americans in foreign lands are being beheaded by these guys whose motives we don’t understand. That’s scary to a lot of people. So I think people are more sensitive to violence now in movies, and it has to do with snuff movies—which never existed before. Al Goldstein of Screw magazine offered $50,000 to anyone who could bring him a real snuff film. And nobody ever did—it was an urban legend. But now you’ve got ‘em—you can watch them at 3 o’clock in the morning in the comfort of your own home. This is very spooky.

“And if you ever look at those, they really screw you up. They’re very disturbing, in a way I don’t think any movie is. They’re very provocative, they make you extremely angry and if you’re a certain kind of person probably also extremely afraid. And confused. So I think that —this is me making an apology for movies I haven’t seen, but there might be a connection. Certainly horror always has had that function that you confront the worst fears you have in a controlled way so that you can experience them, there is a cathartic effect involved.”