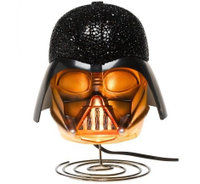 In The Empire Strikes Back, Luke — upon the cryptic command of the obnoxious muppet on his back — enters a foreboding cave. Ignoring the ominous danger music being played by John Williams in the background, Luke goes deeper and deeper into the cave, where he encounters Darth Vader. A lightsaber duel ensues and Luke somehow manages to lop off Vader’s head during his incompetent fumbling.

Of course, it all turned out to be a dream. But I like to think that if Skywalker had managed to lop off Vader’s coconut, he would have tucked it under his arm, punt-kicked that pustule Yoda into the nearest swamp, married his sister and used the helmet as a bedside lamp… once it was properly hollowed out and covered in obsidian sequins.

And now, if you choose, you too can own the Darth Vader Decapitated Head Lamp of my bizarre fever dreams for the low price of $40!