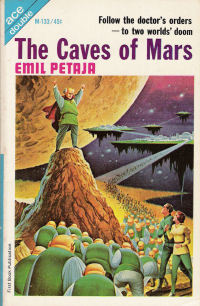 While you’ve been busy thinking of the best movie set on Mars, the brain collective at NASA has been busy exploring the planet’s surface.  A Mars-orbiting satellite recently spotted seven dark spots near the planet’s equator and scientists think that they could be entrances to underground caves.  This is good news because NASA thinks Martian caves are an excellent place to situate manned missions to the planet since they would provide shelter from climate and radiation dangers.

NASA was able to spot the caves by using thermal imaging from the Mars Odyssey spacecraft, which reached Mars in 2001.  The holes, which researchers have nicknamed the "Seven Sisters", are situated on a volcano named Arsia Mons which is located near Mars’ tallest mountain, Olympus Mons.

Of course, every sci-fi fan already knew Mars had caves; we saw them in 1990’s Total Recall, an adaptation of Philip K. Dick’s short story "We Can Remember It For You Wholesale", in which Arnold Schwarzenegger went spelunking with tri-breasted mutants and cyclopean miners.  But even before Ah-nuld freed Mars – and did I mention the tri-breasted mutants? – Emil Petaja had already been there with his 1965 book The Caves of Mars.  Or at least I surmise as much by the title…I haven’t read it, but plot is described as one in which "a mad scientist uses a Martian drug to establish a cult following."