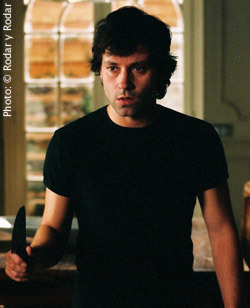 All the horror Web sites today are buzzing about the upcoming Spanish terrorfests, The Homecoming and Julia’s Eyes.  All the excitement is based on a Variety story which says, "Joaquin Padro and Mar
Targarona, producer-partners at Barcelona’s Rodar y Rodar, have set
production dates for two of Spain’s hottest projects — Guillem
Morales’ "Julia’s Eyes" and "The Homecoming," the feature debut of
Sergio Sanchez, screenwriter of Juan Antonio Bayona’s "The Orphanage."

"Like my shorts and ‘The Orphanage,’ I guess the film’s about an impossible return to childhood," said Sanchez."  And an evil, frightening return at that!  Check out The Orphanage site and trailer to see what all the fuss about Eyes and Homecoming is all about.