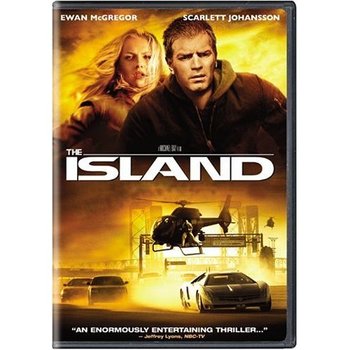 Now that everyone is looking forward to the remake of Logan’s Run, and we all like Michael Bay again after Transformers, isn’t it about time to take another look at the biggest flop of 2005, Bay’s The Island?

Even though it seemed that no one went to see it in theaters when it was released, I can’t be the only one who liked it: the users of imdb.com rate it 6.9 out of 10 stars. (I know you can’t always take imdb rankings too seriously, but this one does represent almost 45,000 votes.)

Here’s what I wrote about it when it first came out:

Smart, sleek and suspenseful, The Island is an audience-friendly sci-ﬁ thriller that balances a provocative premise with plenty of slam-bang action. Within the conﬁnes of an entertaining and frighteningly plausible story, it prods you to think about a whole range of issues, from religion as a tool of social control to abortion, cloning, stem cell research, and the morality of the rich being able to buy better health care than the have-nots of the world.

Still not convinced? Read on for the text of an interview I did with Bay in July of 2005, when we all thought the movie was going to be a huge hit.