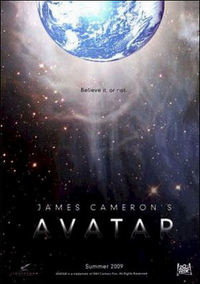 James Cameron has one of the best reputations I have ever seen.  First he comes out of nowhere and surprises the world with a string of sci-fi hits (The Terminator (1984), Aliens (1986), The Abyss (1989), Terminator 2: Judgment Day (1991)) then, after a little side boat trip into Academy Award waters, nothing until 2002’s Dark Angel TV series.  Now, his well-publicized return to sci-fi film, Avatar, is not only highly anticipated, but it’s the talk of the web.  Talk about buzz!

Why the long production time?  Avatar is yet another special effects-heavy film.  But Cameron wanted to do something more than just another sci-fi flick with people acting against green screens. (I’m looking at you Star Wars prequels!)  Avatar will only be shown in 3-D.

I’m not entirely sure how this will play out.  I only saw one movie in 3D (that’d be Jaws 3D) and the effect was cool (The movie?  Not so much…), but I’m not sure the 3D was anything more than a gimmick.  Could Cameron be looking to boost an otherwise lackluster idea?