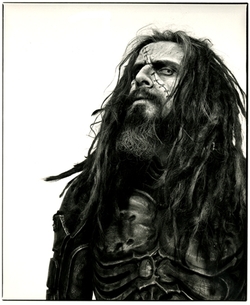 For those just joining us:  I, Horror Department host Todd Ravenface, interviewed Rob Zombie last night for our latest episode.

We’ve been discussing the movie Halloween here, but this is where we’ll talk about the man behind it.

I had my own thoughts on Rob Zombie before the interview was even a possibility, and discussions with people I know and reading articles about him show there seem to be roughly four camps.  Careful, they range from blind worship to green-faced hatred.

The mottoes of those camps are:

He’s totally cool-looking, and I like his music, so of course he should be making movies.  He’s introducing me to a lot of stuff for the first time.

He’s "one of us" getting a chance at the big time.  A fan getting to make movies.  I like the same things he likes, and I would do what he’s doing if I had the opportunity.  He’s always been unafraid to wear his influences on his sleeve, bravely promoting what he thinks is cool and unashamedly emulating it.   I trust him because he’s honest.

He fits into what those clueless Hollywood-types think of as "alternative," so he’s the go-to guy for projects they don’t know what else to do with.  He doesn’t deserve these opportunities.  Plus, I can’t name any of his alleged songs.  His stuff is ok, but they should get a proven guy to do the projects he’s been given.

Coasting on a reputation earned when music and culture weren’t sure which direction to go in (the post-grunge era) he rips everything off and makes weaker, diluted versions of the movies he claims to worship.  A better show of appreciation would have been to leave them alone.  His movies are insulting.

For my own thoughts, take the leap.

My tent is in the camp that shows appreciation for his ability to work within the system to work on whatever projects he wants.  There have to be hundreds of thousands of people who want to make horror movies and want to be a rock star, and he’s done it.

Plus, he did it without "selling out."  You might say accepting a large budget and working with a major studio is selling out, but put down the Hator-ade, he cast it with all his B-movie buddies (Sid Haig, Ken Foree, etc) and unknowns.  If he were sucking up or selling out, we’d be seeing Justin Timberlake under the mask and he’d be chasing some chick from 7th Heaven around.

I think House of 1000 Corpses and The Devil’s Rejects are imperfect and maybe have too many "homage" shots that pull me out of the story, but there are enough memorable images and situations to keep me interested.  He has a cool eye.  I think he’s got enough experience now to make his next movie truly worth our time.  He’s worked low-budget and big-budget now and kept his integrity.

I don’t like his music.  I didn’t ask him about it.

These were all my thoughts before the interview.  Stay tuned for the post-interview and during-interview thoughts.