Society owes certain debts of gratitude to visionary geniuses. For example, Benjamin Franklin. Albert Einstein. Hieronymous Bosch. The guy who invented those machines at the grocery stores where you can dump in a bag full of quarters and magically transform them into crisp dollar bills. And the creative genius at Hammer Films who, sometime in the 1970’s, leaned back, framed his hands in the air as if he were staring up at an invisible marquee and said, “I got it. Our next picture. Zeppelins vs. Pterodactyls!” 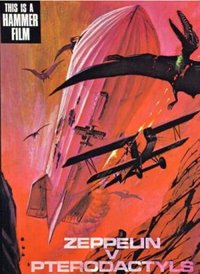 Unfortunately, some revolutionary ideas never come to fruition. Politics get in the way. In this case, Hammer Films could never manage to attract enough investors to see what could have been their magnum opus come to fruition. Blame the Anti-Hindenburg Lobbying Groups, those bastiches.

But thirty years later, the Internet has stepped in to make the film a reality. A clever group of artists have created a mash-up of public domain cliffhanger serials and classic films to make the film a reality. Boing Boing tells us to “watch for glimpses of John Wayne, two ‘Wilhelm’ screams, and one actor who wasn’t even born until 1939.” This is the sort of genius project that makes me bless the Internet every day as the greatest invention in the history of mankind.