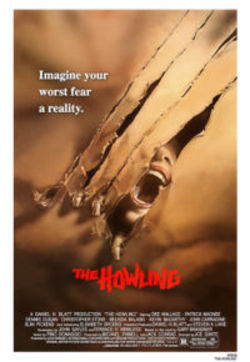 Maybe you watched The Howling this weekend.  Pretty sweet, right?  Without too many spoilers, I think we can agree it still has a lot of charm.  Those flesh pulse special effects still sicken, and the whole idea of the society of monsters all living together was pretty fresh back then and seems so today.  I think.

I mean, usually you get the Single Unstoppable Killer (SUK) or the Horde of Nameless Drones (HoND), but here you get that rare Gang of Monsters (GoM), and The Howling gives great GoM, I think.

Some other GoMs coming up are 30 Days of Night and Skinwalkers (delayed, but starts this Friday!), and the best from the past is Near Dark.  Got a great GoM I left out?  Name it!

For more on The Howling, take the leap

If you watched The Howling for the first time this weekend, give me
your impressions.  Sometimes its hard to see a famous or influential
movie in any genre and still appreciate it, since, well, it’s been
ripped off so much it looks like a rip-off of itself.

We’ve talked in the past about how something like, say, the original Halloween or Dawn of the Dead were described as "boring" by teens seeing them today.  I don’t think The Howling is boring, but no Scream-bred teen am I.  At least that "piece of my mind" gag is still hilarious.

I dunno, they must have done something right.  There were, like, a billion sequels!

If you’ve seen it before and watched it again, tell me how you feel it holds up.  Was Ginger Snaps better? I’m looking at you, goatlings.