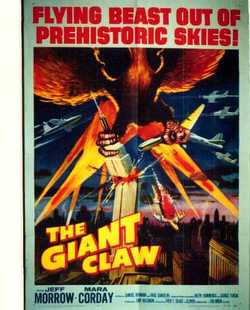 Sam Katzman, the prolific Hollywood producer of over 240 movies, was a low-budget Hollywood legend who worked on everything from the Bela Lugosi and East Side Kids movies to Elvis flicks to some over-the-top horror offerings

Save your money, folks. On October 16, you’ll be able to procure four Katzman horror movies in one DVD package.  These include: The Giant Claw, Zombies of Mora Tou, Creature With The Atom Brain and The Werewolf.

I’m fond of the so-bad-it’s-good puppet in The Giant Claw and, actually, The Werewolf is a really watchable riff on the classic with wacky doctors who are responsible for turning a man into a monster.  Then, there are zombies in them thar ocean deeps in Zombies of Mora Tou.