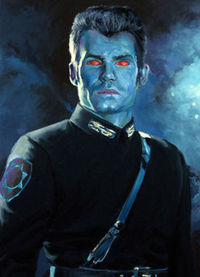 Over at the Movie Blog, John Campea has fallen down to his hands and knees and — smearing the creases of George Lucas’ trousers with snotty, plaintive tears — begged the director of Star Wars to consider making some new sequels. Specifically, sequels based on Timothy Zahn’s Thrawn Trilogy novels.

Thrawn: the blue-skinned, red-eyed Grand Admiral who took the scattered and broken remnants of the Imperial Fleet and led them against the nascent Republic as a serious threat. It’s an excellent idea, certainly. But how would it be done?

Pretending for even a moment that Lucas would give the big screen treatment to another author’s vision (and he seems far too egotistical to me to do that), no one really wants to see Grandma Leia and Octogenarian Han traipsing through the galaxy. Everyone’s far too old for a chronologically loyal rendition.

But a Clone Wars style animated version? That has potential. It helps that Mark Hamill has become a talented and successful voice actor in his own right. Harrison Ford and Carrie Fisher might be harder sells, but Anthony Daniels always needs work and Billy Dee Williams has done voices for Star Wars games. Animated sequels to the original trilogy? Perfect.