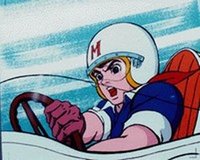 I doubt even the most feverish Speed Racer fan was really clamoring for a movie. For most fans, Speed Racer‘s appeal exists exactly in the space between indiscriminate youthful nostalgia and a joint.

So I think most are skeptical of the upcoming Speed Racer feature film, although that skepticism is slightly relieved by the involvement of the Wachowski Brothers, who — while hardly geniuses — at least manage consistently entertaining films… at least, when they aren’t making sequels to The Matrix.

And some of their ideas approaching the film seem pretty intriguing. One of the things they are apparently doing is using a new camera and stop-action technique to mimic the look of the cartoon.

The idea is simple: just like in a cartoon, every scene’s foreground and background elements will be entirely in focus. Coupled with the sound effects and music from the original cartoon, it sounds like a technologically interesting attempt to mimic the feel of a cheap cartoon in real life.