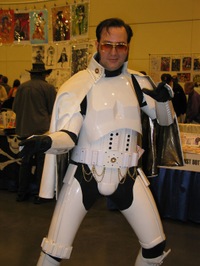 If we learned anything from this past week it’s that Elvis is still a money-maker.

To that end I can’t believe no one’s made an Elvis zombie movie.

It would be great fun for the whole family. Certainly no worse than “Clambake” or “Blue Hawaii.”

It could feature a killer soundtrack by Danzig, The Cramps, Mojo Nixon and Rob Zombie. And Constantine Moraulis. (Gotta appeal to the “mainstream” crowd.)

My favorite Elvis movie was just re-released on DVD. It was made in 2002 and it doesn’t actually star Elvis Presley. BUBBA HO-TEP is a genre-defying classic, starring Bruce Campbell as The King. But he’s an OLD Elvis living in a East Texas nursing home. See Elvis had switched places with an impersonator (like “The Prince and the Pauper”) but then the Impersonator died on the toilet, making the world believe Elvis was dead.

But wait, there’s more. A mummy is preying upon the nursing home residents, eating their souls through the butt-holes.

And the only person willing to help fight the mummy is an old black man (played by the late Ossie Davis) who thinks he’s JFK.

If that’s still not enough, the film was written by cult author Joe R. Landsdale and it was directed by Don Coscarelli (“Phantasm”, “The Beastmaster”)

The film ends with a teaser for a sequel called “Bubba Nosferatu”, in which our hero returns to battle a coven of She-Vampires. After the success of “Bubba Ho-Tep” Coscarelli is actually considering making this one.

Internet rumors say the film is being made, with Bruce Campbell joined by Paul Giamatti as Colonel Tom Parker. Normally I’d dismiss such gossip, but Giamatti strikes me as the kind of guy who’d actually make “Bubba Nosferatu.” I sure hope so.