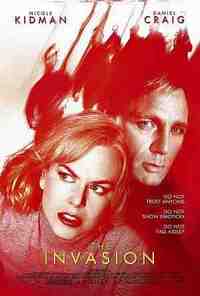 The reviews for The Invasion, the latest remake of The Invasion of the Bodysnatchers, are starting to roll in, and boy, most of them aren’t very kind. I’d do a Bad Review Revue, but I’ve unfortunately been beat to the punch by GreenCine Daily.

Instead, I’ll focus on an extremely thoughtful and contrarian review by Gary Westfahl over at Locus Online. Not only did Westfahl like the movie, but he thinks it’s trying to kick-start a new genre all-together: the thinking man’s popcorn film (I’d say that genre already exists and it was created by The Bourne Identity, but leaving that aside…)

One thing that Westfahl claims is a major point in the film, even more so than the standard theme running through these films of citizen’s distrust of their govenment, is the filmmaker’s commentary on a modern society that looks to drugs and medication as the first solution for personal problems. Kidman’s protagonist — a psychiatrist — pops pills like candy and prescribes them to people for non-medical issues like sadness over a break-up or nervousness about a job interview.

The theme is one that hits home for me, not only because I come from a family that primarily turns to tranquilizers under the strain of intense emotion, but because of the honestly original irony that it spins on the franchise: the aliens are as emotionless and tranquil as we are massively medicating ourselves to be, and yet we fear them as something inhuman. It sounds like an interesting observation on the defining quality of humanity — passion and emotion — and our own blindness to this.

I’m still concerned this film might be a dud, but Westfahl’s review may have turned me around to go see it. Anyone out there got any first impressions to share?

An Intelligent Virus: A Review of The Invasion [Locus Mag]