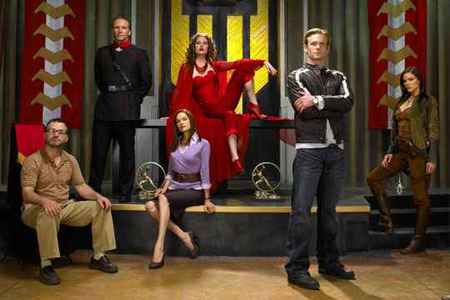 The SciFi Channel’s new series, Flash Gordon, premiered on Friday night, and Internet response seems united. Imagine an ocean of bile, regurgitated by the spewing bellies of a million sci-fi fans, sweeping across the country in a tsunami-like wave. Imagine the sound of a thousand babies crying out in mortal agony, then the thick, meaty splats of their soft pink heads colliding with something hard, as a Mephistophelean SciFi Channel executive holds them firmly by their ankles and swings them, one by one, against a brick wall. Imagine a nightmarish cacophony of laughter. Behold: sheer horror.

Ladies, gentlemen and droogs, for your perusal, the Flash Gordon Bad Review Revue, after the jump…

Generally speaking, I tend to like the things I choose to consume for entertainment. And when I don’t, my misfire usually ends in an experience of mediocrity. But Flash Gordon blows. If anyone ever asks why sci-fi TV has the reputation it does, point them in this direction… Flash (Ah-Aaaaah!) is portrayed as a go-nowhere mechanic/jock who still lives with his mother… Ming isn’t so much merciless as he is a conceited boor. And, unlike the water situation, I see there’s no shortage of hair mousse on the planet Mongo. Seriously, this guy could learn lessons of villainy from Richard Simmons. — SF Signal

The guy playing Flash is great, but everyone else is pretty stupid. And the Ming is completely underwhelming. He looks like he should be wearing a cardigan and sailing around on a yacht as opposed to being some sort of dictator. Ming the Merciless? More like Ming the Milquetoast. — Quarter to Three

“I just think it should be a job requirement. If you’re going to run the SciFi Channel, you should like sci-fi,” I ranted, just getting heated up. “I feel like that channel is run by the same preppy cheerleaders who made fun of me for talking Trek in high school and they’re just programming what they think geeks would like because they have no idea what actually makes good sci-fi.” — Pink Raygun

I’m just happy that the “Doctor Who” episode that preceeded it was as good as it was, or it would have been a totally wasted SCI FI Friday. — Slice of SciFi

I caught the premier of the new Flash Gordon on the SciFi Channel Friday night. And wasted a good hour of my life. They cancelled the Dresden Files and put their hope in this show? I think something is seriously wrong with these people. They wouldn’t know a good show if it slapped them in the face…. Not only was Flash Gordon as corny as a B movie, but the special effects look like they came out of someone’s basement. The dialog and writing was laughable, and not in a good way. Basically, Doctor Who (for the bizarreness) threw up on Flash Gordon. — SciFiChick

This limp retelling of the classic outer-space tale is hardly the savior of the universe. It’s everything you don’t want it to be and never what you want it to be. It’s a boring, cheap, poorly acted hour of ill-conceived science-fiction television… The Sci Fi version of “Flash Gordon” is a weak, lifeless modern-day interpretation of a comic strip and movie serial that had pizazz and a sense of adventure. When it should be full of energy and scope, it’s tired and small. When it’s supposed to have personality and style, it’s dull and straightforward. This “Flash Gordon” is a case of no flash and no substance. — Salt Lake Tribune