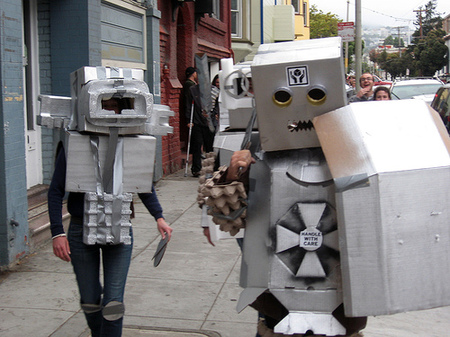 Every child knows the delicious thrill of knocking a robot’s block off through the cheap though surprisingly timeless game of Rock ‘Em Sock ‘Em Robots. This game, perhaps, is mostly responsible for most people’s primary interest in the fledgling field of robotics: we want robotics to advance so we can see them kick the gears out of each other.

Unfortunately, short of some remote controlled robots with awesome buzzsaws attached, robots aren’t quite ready for gladiatorial combat yet. But some wistful San Franciscans, pining for the future of goofy robot combat to come, have taken matters into their own hands and organized the world’s first Cardboard Robot Rumble.

Imagine a constabulary of nerds, dressed in spray painted refrigerator boxes that they have duct taped together, whacking on each other with styrofoam clubs and making laser noises with their mouths. That’s the glory of the cardboard robot rumble.

Laughing Squid has a great collection of links to this year’s rumble, held in June in San Francisco. Let’s hope, like Zombie Walk, this becomes an international phenomenon.