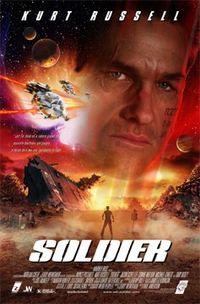 I’ve always been slightly chagrinned by my love for the cheap sci-fi action film Soldier. Part of it is due to my complete adoration of Kurt Russel as the stoic eponymous soldier, who after a lifetime of brutal conditioning is replaced with genetically bred supersoldiers and dumped as refuse on a trash planet as dead, forcing him to rediscover his humanity.

Remembering it fondly the other day, I happened to look it up on Wikipedia, where I was surprised to see that it had been classified as part of the Blade Runner series of articles. Imagine my surprise when I discovered that Soldier was actually meant to be a side sequel and spiritual successor to Blade Runner and was written by the same screenwriter, David Peoples.

According to Wikipedia, the film takes place in the same universe. The supersoldiers introduced in the film are actually meant to be Replicants and there are several nods to the original film, including the location of Tannhauser Gate, which is a battle scene in Soldier and mentioned by Roy Batty in Blade Runner during his final closing speech. Also, the flying cars in Blade Runner, known as spinners, are shown on the junk planet in disrepair.

This actually makes me like Soldier a little bit less. As a fun, disposable sci-fi popcorn flick, it has merit. But as a spiritual successor to one of the classics of the genre? It’s certainly a disappointment.