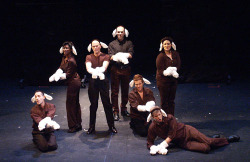 A few months ago there was an off-Broadway musical for Edward Scissorhands which was, by all accounts, a pleasant enough concept but ultimately harmless.  Silence! The Musical, based on Silence of the Lambs, however, seems…dangerous.

Why, no further proof is needed than the song linked to here.  Warning, goatlings, it features elements of terror, scatalogical filth, cuss words and…an infectious tune – It clicks the link or it gets the hose again – Put the !^@*! Lotion in the Basket.

Need more?  Though like Dr. Lecter and Clarice we should follow the simple rule of quid pro quo, we give you one more – Quid Pro Quo.

I think the Horror Department will be planning an outing to this particular show no matter how many "offs" they append to the word Broadway.

Oh, Fringe Festival, you never fail to delight.  You never fail to make us feel as if the world of horror movies is a vast, seething, rippling fertile garden box of the richest soil from which the most beautiful musical bloodflowers might rise.