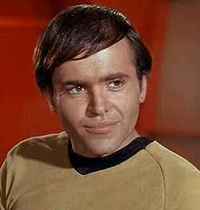 Bold claims for the utterly redoubtable Ain’t It Cool News, purveyors of rumor sometimes, fact almost never and fiction predominantly. So take with a grain of salt. But Moriarty is claiming to have laid his hands on the official Star Trek Xi casting sheet. Which doesn’t seem important, but to Trekkies, the age ranges and roles being casted offer some insight into the place that J.J. Abrams’ prequel will be taking in the official continuity.

The casting sheet, as AICN is reporting it:

[UHURA] 25ish -African American. Brilliant, beautiful, heroic and FUN!, Uhura is almost tom-boyish – as if she grew up in a houseful of brothers.

[SULU] 25-32 -Asian American male (preferably Japanese). Helmsman on the Enterprise. Extremely fit, capable and dedicated. A bit of a wildcat

[MONTGOMERY(SCOTTY) SCOTT] -28-32 a brilliant ship’s engineer. Must be able to do a flawless Scottish accent!”

Chekov seems out of it, which is alright by me, since he’s the most steotypical of the bunch (which in and of itself is a bit progressive of Roddenberry, if you think of it: for a change, one of the minorities isn’t a walking, talking cliche).

It appears at first glance this places the chronology of the film before Star Trek‘s first and second pilot (in other words, a prequel to the events of the original series). It could also potentially take place in the first season, since Chekov was not yet around (although, of course, Chekov has been established since Wrath of Khan as an Enterprise crewmember before the second season).

So is it the real casting sheet? God, I hope not. It saddens me that a Hollywood casting sheet might be so vague and unprofessional looking.

Some Confirmed Details On The Casting For The New JJ Abrams STAR TREK! [Ain’t It Cool]