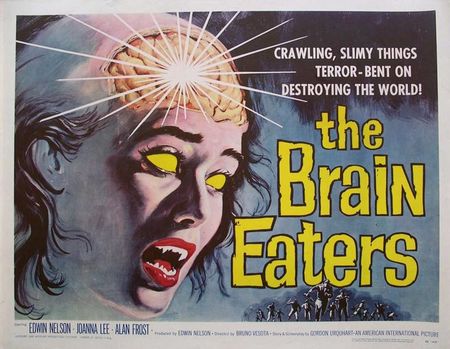 I’m an unrepentant fan of early sci-fi posters: I have a poster for Fritz Lang’s Frau im Mond hanging above my bed, which more than one girlfriend has mistaken for a robotic erection, and glared skeptically at me as I try to explain that I am no, in fact,t a closeted homosexual with a fetish for hunky robo-men. Nothing wrong with that, but I understand my girlfriends disdain: a lustful homo-erotic hankering for robot sex is not what you look for in a life partner.

But this entry isn’t about Frau im Mond and its unbelievably phallic poster. One of my favorite sci-fi posters is for The Brain Eaters, a 1957 film loosely based on (and totally plagiarizing) Robert Heinlein’s great Cold War body snatching novel, The Puppet Masters.

Just look at that poster. A shrieking, inhuman vampire with glowing yellow eyes, her had shaved, her frontal lobe clearly exposed. The tag line is better than anything Hollywood has come up with in recent memory. Who wouldn’t want to see a movie about crawling, slimy things terror-bent on destroying the world?

The Brain Eaters starred a young Leonard Nimoy. The film isn’t quite as good as the poster, but its noteworthy for Heinlein’s lawsuit against the film for plagiarism. If you see a copy of this poster online, do yourself a favor and pick it up: it’s great for any kitchen.