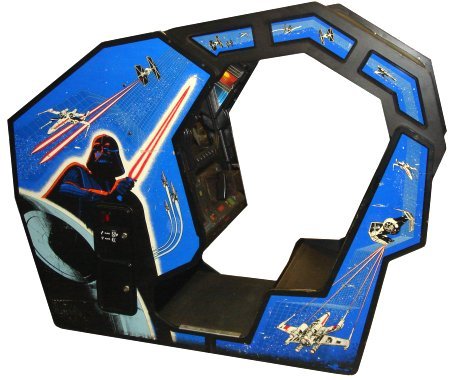 In 1984 or so, when I was no older than 4 or 5, my parents used to take me up to Wells Beach in Maine. It was a two hour drive, which is a tortuous limbo for a child, made even more tortuous by my feverish anticipation. I wasn’t excited about the beach: I had already seen Jaws and I was always a bit of a wuss, a single tendril of slimy seaweed wrapping around my ankle being enough to send me into a four hour fit of bladder evacuating hysteria. But I had something more special than sandcastles, salty waves and jellyfishes gasping in the sun to look forward to. Because Wells Beach had an arcade, and in that arcade? The Star Wars game cabinet by Atari.

If you’re not a gamer, or don’t recall the Star Wars game, all the more pity. It was something wonderful. You sat in a cabinet that was a doppelganger of an X-Wing fighter and made a run on a wire-frame Death Star in first person as Obi Wan Kenobi and Han Solo advised you on speakers. It’s still a fantastic game and I often dust it off on a computer emulator. But it’s not good enough: I’ve always wanted to own the cabinet itself.

Now I have my chance: a British company is now selling refurbished Star Wars arcade cabinets for about $7,000. That’s pricey, but I might be able to sneak the expense item by AMC for my next invoice.