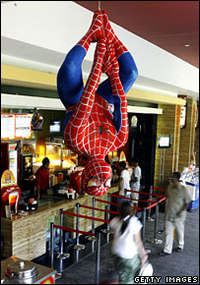 Soon enough, hanging upside down in the rain making out with Kirsten Dunst will no longer be the domain of radioactive spider-bitten supermen. Researchers at the Polytechnic of Turin, Italy have discovered a theoretical technology that will allow suits to create real-life Spidermen.

Billions of tiny, hair-like structures perforate a spider or gecko’s foot. These tiny hairs allow them to stick to walls and ceilings, holding hundreds of times their own weight, thanks to very weak van der Waal intermolecular forces that are generated by the tips of the hairs and the surface of the wall.

A gecko only uses a tiny fraction of the theoretical limit to van der Wall forces, so in theory, carbo nanotubes — tiny culinders of carbon that are ultra strong and can be organized into large fibers — could be used like gecko hairs to keep a human body defying gravity.

Of course, it’s not really a spider suit until science can come up with some real web slingers, and include a lusty Kirsten Dunst sex bot inside the package. Scientists! Get cracking.