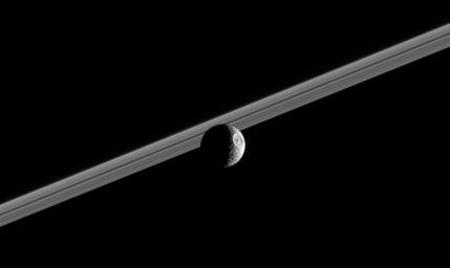 Swinging across the orbit of Saturn, NASA’s Cassini probe took the above image, and bladders evacuated underneath the robes of astonomers all across the globe. "Oh my god… the Empire has found us."

Domination by the evil Galactic Empire, headed up by the genocidal Emperor Palpantine and his evil cyborg henchman, Lord Vader, has long been a fear of the US Government. In the early 80’s, Ronald Reagan valiantly tried to get the gears turning on a prospective defense system against the Imperial Armada. The initiative — the much maligned Star Wars program — was a great idea, but unfairly ridiculed by the press until it proved so unpopular that the program was scrapped.

But who’s laughing now? 74,500 miles away from Earth, the Dark Star hovers in orbit underneath the rings of Saturn, gathering its resources for a decisive attack. And when that day comes? It’ll be the sound of a million voices shouting out in terror, then suddenly being silenced.

Oh sure, the scientists are trying to soothe our fears. It’s just Mimas, one of Saturn’s innermost moons, with an 80 mile crater called Hershel. But sci-fi fans know the truth and turn to Mark Hamill as our only hope.