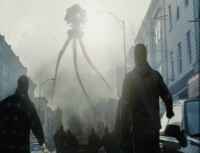 I think we can all agree that faster-than-light travel (or even light-speed travel) is a difficult if not insurmountable problem. I think we can also agree that even in the genre of science-fiction, Hollywood’s primary focus is fantasy.

So it’s not surprising to me at all that so many alien invasion or visitation films have ignored the logistics of aliens coming to earth, taking it as read that they have the technology to come visit us in the first place. But as I was thinking about this, it suddenly occurred to me that I wasn’t really sure that very many films had ever bothered coming up with a plausible mechanism to explain the visitation of aliens to earth.

There’s two technical possibilities for alien visitation: the first is that FTL travel is possible, in which case, aliens have it. But in most invasion films that I can think of, aliens simply appear, with no explanation of the technology that got them there… not even bothering to write a wormhole into the script somewhere.

The other possibility is that FTL travel isn’t possible, in which case, aliens need to either be local or they need to spend a long time getting here. Local aliens have pretty much gone out of fashion since science has pretty much proven they don’t exist: in fact, I don’t believe it is ever specified in Spielberg’s 2005 War of the Worlds adaptation that the aliens are Martians at all. In fact, that film deftly sidesteps the entire FTL issue by having the aliens come out of the ground: I remember thinking it ambiguous, whether or not they’d been buried for millions of years or whether or not they’d teleported through the lightning storm. The only other film I can think of with local aliens is, bizarrely enough, 2010, with the life form developing on Europa.

Can you guys think of any invasion films with plausible space flight? I know I’m probably just overlooking them. Let us know in the comments.