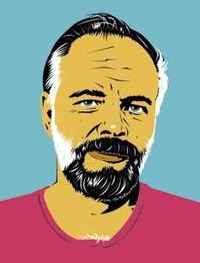 Adam Gopnik over at the New Yorker has written a gorgeous profile on drug culture sci-fi visionary Philip K. Dick, the author whose paranoiac ideas has inspired so many fantastic Hollywood sci-fi films like Blade Runner, Minority Report and A Scanner Darkly.

It’s a five page essay, which makes it a bit long to boil down, but Gopnik’s experttly summarizes Dick’s life: a sci-fi writer who outputed works with all the breathless indefatigability of a hack thoroughly addicted to speed. Which, of course, Dick undeniably was. His characters were one-dimensional, his characterizations trivial. He was not a writer of literature: he was just a writer. But that’s not to disparage Dick.

Like Lovecraft, he was a writer of ideas who used fiction as his form. In Dick’s case, his ideas were essentially about an insane oligarchy extrapolating its will upon a numbed majority population. But, as Gopnik points out, Dick’s genius came in his ability to identify that contemporary political status quo as being just as applicable to the future (and eventually the past).

Gopnik’s right: Dick’s actually not much of a novelist. He has no feel for characters or people: his novels feel as detached and psychedelic as the fever dreams of the druggie that he was. But his ideas are characters in and of themselves.

Blows Against The Empire [New Yorker, via SF Signal]