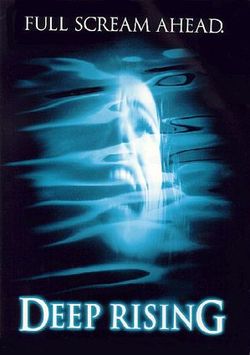 The comments generated by our Question of the Week yesterday are a treasure trove of personal horror histories.  You goatlings have fascinating lives, and if you haven’t been following the thread you should click…here.

It inspires me to talk about the time I was a penniless ravenlet in Athens and tried to book passage to Venice.  They don’t let blackbirds ride with the regular folk, so I had to purchase something called a "deck class" ticket, and with visions of Deep Rising in my head, I happily climbed aboard.

"Deck class" means you lie on a disposable strip of plastic on a metal floor (unless you’re me, and all you have is a Greek newspaper).  Burnt by the sun and frozen by the moon.  I have never known such misery.  All seemed lost, until…I was saved by a horror movie.

How is this possible?  Take the leap and see the regenerative properties of horror!

Knowing every misery, a stranger to comfort, I starved and burned on the filthy, oily deck of the ship.  Every few hours, a horn would sound and cinders would rain down from the exhaust pipe.  They would come down burning and add to the black soup which was the floor.  My Athens Daily newspaper bed was soon liquefied.

The others on deck were tramps, hobos and kids from some kind of Summer camp.  They skidded and rolled in the filth, laughing and punching each other.  Their counselors would emerge from a hatch in the floor with boxes of apples, slide it across the deck and they would gorge themselves and toss the cores into the wine dark sea.

I had to get off the deck.  My feathers were falling out, so in desperation, I sneaked down into the hatch.  It was like Deep Calm or something.  The ship was a floating parking garage, and I made my way past weird models of Jeep and Saab until I found some kind of living quarters.  And such living quarters!

It was an entertainment center for the crew, the swarthy crew and the camp counselors.  They were gathered around a large television watching…Final Destination.  Deck trash were strictly forbidden from the body of the ship.  If they had turned around and caught me, I would have been fined (beaten?). but they were all riveted by the teens and traps of Final Destination.

I made no noise, and quietly lay down watching both the movie and the flickering of light on the beards and facebones of the terrifying crew.  As more time passed without being detected, I became less afraid of baling hooks and boat ropes, and I fell asleep.

When I awoke, I was alone in the garage, and the ship had arrived in Venice.  Thank you Final Destination, you helped me reach mine, alive.