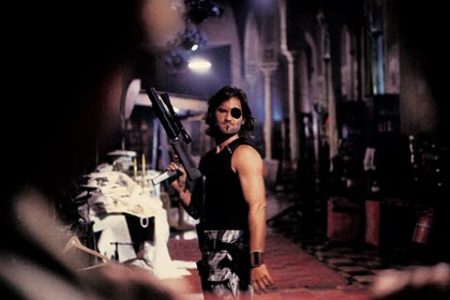 Filmwad has posted a bit of Diggbait up at their site, “Five Movie Franchises that Need a Third Installment.” The list is mostly genre fare, including the Gremlins, Ghostbusters and Predator franchises. But slapped right in the middle, making the list just a bit more interesting and less obvious? John Carpenter’s Escape from New York and Escape from LA.

What interests me about the mention of John Carpenter’s Escape series as one that deserves to be rounded out to a trilogy is that Carpenter himself has mentioned the possibility of doing a third film, called Escape from Earth.

No one really knows what the plot would be, except for the obvious extrapolation that can be made from the title. Carpenter mused that after Escape from New York and Escape from LA, the only place Snake Plissken hadn’t escaped from was the planet.

And Escape from LA certainly sets up a sequel like that. At the end of the previous film, Snake Plissken had pushed a button that had destroyed all of the world’s electronics, effectively sending the world back into the Dark Ages. What would be wonderfully ironic would be a final film in which Snake Plissken has to fight his way through the nightmare world he created in order to escape into outer space.

Of course, that’s not likely to happen: Escape from LA, for all its throwback charm, didn’t do so well, and Kurt Russell doesn’t have the cachet he once did. Instead, Hollywood seems intent on doing the obvious and remaking Escape from New York, with Scottish actor Gerard Butler slated to play Snake Plissken. Kurt Russell’s priceless quote when hearing the news…

“When I was told my initial reaction was, ‘Oh man.’ “I do think that character was quintessentially one thing – and that’s American.”