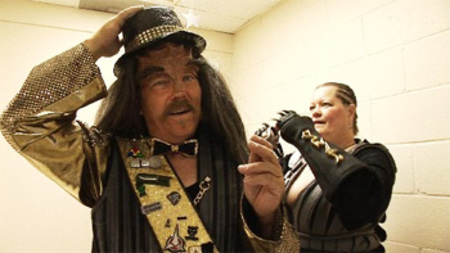 As a sometimes journalist myself, I’d love to know the thought process that birthed this utterly surreal local color piece for the Dallas News, in which one brave rogue reporter covers in detail a gathering of Klingons at the local Krispy Kreme.

It’s a pretty fantastic article, taking delicious and ironic pleasure in contrasting the savage, noble, violent culture of Star Trek’s Klingons with the absurdity of a bunch of Beardos, slathered in face paint and crammed into tight leather costumes, sitting around gorging themselves on donuts and pretending to be imaginary moon men in their spare time.

Back at the Krispy Kreme, a bit of glazed doughnut drops from George “Salek” Whitaker’s beard, landing near the large spike on Mr. Alcala’s boot. Mr. Alcala doesn’t notice. They are locked in debate over which episode Capt. Kirk kissed Lt. Uhura – said to be the first interracial kiss on U.S. television. They decide it was a 1968 episode, “Plato’s Stepchildren.”

It’s a puff piece, but I love it: between the journalist’s wry attention to detail and the ludicrous nature of a bunch of Klingons sitting around a donut shop, pretending their glasses of milk are blood wine contrast absolutely perfectly.

Our galaxy could use a few good Klingons [Dallas News]