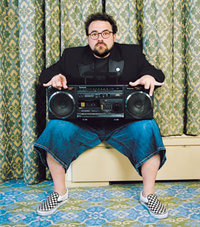 Kevin Smith — the exponentially expanding writer and director behind Clerks, Chasing Amy and Dogma — will not apparently be directing an episode of Battlestar Galactica’s fourth season, as was originally planned.

I’m rather relieved. If I need a quick infusion of flatulence and semen jokes, Smith’s my man. But when I want bleak, amoral, claustrophic science fiction tension, I’d just as soon let the Farrelly Brothers direct an episode of Battlestar Galactica.

Bluntly, I like Smith more as a monologuist than as a director or writer (A Night With Kevin Smith is a must see: it’s easily funnier than anything he’s ever done). His schtick in Clerks seemed a lot funnier in retrospect than it did when I revisited it, and his films simply haven’t evolved over time: if anything, they’ve simply become more stilted. He’s a funny guy: he just can’t write or direct worth a damn.

Not that this will necessarily stultify any of Smith’s genre ambitions: he’s still on hand to direct an episode of Heroes: Origins and Reaper in the fall.