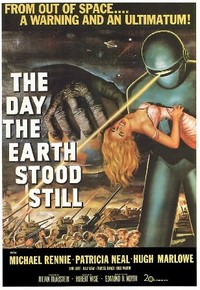 There’s a lot of stuff to like about The Day The Earth Stood Still. Klaatu’s initial appearance on Earth. His “message of peace”: go into outer space and we’ll cream you. The progressive and casual denunciation of the United Nations as an ineffectual organization of bickering bureaucrats who can’t even agree on where to meet, let alone settle human affairs. And, of course, the lovable, ass-kicking robot Gort.

But it’s a product of its time: with its heightened awareness of Cold War politics, it’s always been a film rather low on my list of movies that could be successfully updated.

Still, Hollywood’s bravely (and by bravely, I mean unoriginally and predictably) returning to the classic film. Casting is underway and they’ve picked the right man for the job of Klaatu: none other than Keanu Reeves.

I know this decision will incense some fans, but let’s face facts: Keanu Reeves wooden thespian skills perfectly match Michael Rennie’s wooden portrayal of Klaatu. The only question is whether or not Keanu can keep the stoner “dude” out of his voice as the implied punctuation of every one of his sentences. He’s never quite managed that before.