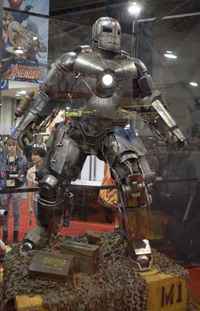 I was initially blase about the film: I’ve certainly seen enough lackluster superhero films come and go, helmed by directors more experienced than Favreau and starring actors more versatile than Downey Jr. But this quote from Favreau, explaining how different it is working for Marvel Comics’ production studio and not a biggie, is icing on the cake:

…It’s not like you have to contact a studio to get approval on everything. So it’s a lot like the movies I’ve worked on in the past. I think there’s something incredible to be discovered in the moment, especially when you have actors like Robert and Terrence, who understand it and have been around and see themselves as shepherds of their roles. They often know more about their character than the filmmaker does, because that’s the kind of actor I hired.

For me, what this indicates is that Marvel is more willing to take directorial punches on the jaw. They come from a genre (comics) which is based largely on rolling with the hits, adaptating characters, events and even continuity according to the excellence of the story at the time. There’s debate as to how that works in the field of comics, but within the extremely episodic realm of Hollywood franchises, a roll-with-the-punches, dynamic philosophy — unhampered by tedious executive board meetings — sounds ideal.