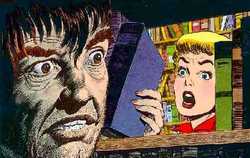 Mental illness: it’s a classic example of one of those things that aren’t really all that much fun in real life, but which, when translated to the screen, suddenly become strangely attractive.

I suspect it was the EC Comic artists who created the modern cult of the charismatic homicidal maniac. When Johnny Craig or Jack Davis drew one of these guys (and of course, they were usually guys, though on occasion a woman could lose it and become one too) they always invested them with a curious sex appeal. With their swinging hatchets (Swisssssssh-thunk!), sacks-full of body-parts, and bug-eyed, sweaty-browed, no-one’s-distracting-me-from-the-job-I-need-to-do intensity, the EC homicidal maniac was the ultimate prototype for the dangerously crazy kook as superhero. Jason, Michael, Hannibal… All trace their roots back to the EC bullpen.

Not that that gets to the bottom of what’s so appealing about these figures. If you ask me, cinematic crazies are appealing because – in a nutshell – we envy their appetites. They do all the nasty stuff they do not because they’re evil (though they may be that) but because they’re… hungry for something. Their menu of desires holds an extra entry that we normal – or semi-normal – folk don’t have. And that makes us curious.

That’s one reason why Anthony Hopkins’ Hannibal is the definitive homicidal maniac. He’s ALL about appetite – and the appetite he’s so keen on satisfying is one that lies outside our – and Jodie Foster’s – ken. Which is why, along with all the surface disapproval, Jodie and the rest of us are so oddly envious of him. Hannibal – and all the more-than-simply-human crazies who came before him — is like a negative image of a superhero. He’s bad. Very bad. But in – or maybe even in spite of – his badness, he gives us hints of a larger landscape of experience. Hannibal, evil or not, is BIGGER than everyone else in the film. He wants something we never dreamed of wanting. And gross or not, we can’t help loving him for it.