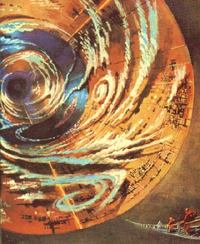 After Kubrick’s seminal adaptation of Arthur C. Clarke’s short story The Sentinel, which became 2001: A Space Odyssey, you’d think that Hollywood would have started cashing in on Clarke’s extensive oeuvre of novels and stories. But that never really happened, outside of an execrable sequel to 2001. Perhaps even Hollywood knew that only a Kubrick could adapt a genre author as cerebral and low-key as Clarke.

But Hollywood again looks ready to try their hand at Clarke. Morgan Freeman is pairing up with David Fincher to try to get Clarke’s 1972 masterpiece Rendezvous With Rama made into a film. Rama is about the mysterious arrival of a 30-mile-long alien spacecraft that is drifting through the solar system, and the exploration party sent to examine it.

“It’s a very intellectual science fiction film, a very difficult book to translate cinematically,” said Freeman. “[At least] we have found it very difficult to translate, to get ready for film…. There are no guns, no explosions. Although it’s fiction, it’s all based on pure science.”

I’d be interested in seeing this made. Fincher’s no Kubrick (who is?) but he’s a solid, cerebral director with more classics under his belt than clunkers. And, hell, after his (unfairly, in my opinion) maligned Alien 3, I’d really like to see him redeem himself in the eyes of genre fans.