Science fiction cinema is no stranger to implausible robots, running the full gamut from implausibly cool to implausibly terrible. It is easy to see how it happens: requiring some hook to differentiate their clanking, lumbering metal man for the pack, some directors luck out with their robot-gorilla hybrids, while others fare far more poorly with the equally ridiculous hook of a gay robot. Here are five robots that we here at SciFi Scanner find noteworthy, not by dint of their greatness, but by virtue of their ridiculousness… which sometimes led to greatness.

This list is not meant to be conclusive, and is certainly vulnerable to semantic attack: for example, is a mecha really a robot? But a huge part of the point here isn’t just to tell you our favorite implausible robots, but to get you to tell us yours. Please feel free to bring the bickering, the correcting and the suggesting into our comments section below. 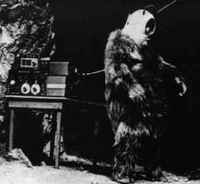 Ro-Man — A flabby wrestler in a stinking, sweltering gorilla suit, robotified by the addition of a diver helmet with a television antenna scotch taped to the top. This is the face of Robot Monster: the alpha and the omega, the destroyer of worlds. With the help of his Calcinator Death Ray and the N.A. Fischer patented Billion Bubble Machine, Ro-Man has managed to destroy everyone on Earth save eight bumbling, incompetent thespian survivors. Adding to the absurdity of Ro-Man’s appearance, he apparently comes from an entire planet full of robot gorillas: his boss, "The Great Guidance", looks exactly the same when displayed on the small screen of the Billion Bubble Machine. 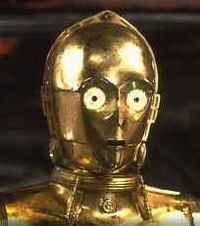 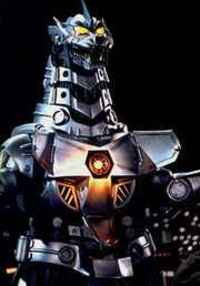 Mechagodzilla — Created by a race of ape-like aliens who lived in a Black Hole, Mechagodzilla seemed like a good idea at the time: a titanium-constructed doppelganger of the Big Green One who breathed a rainbow-coloured optical laser, making him the most GBL-friendly of all of Godzilla’s foes. He went to to toe with his fleshy namesake, which impressed the Japanese enough to build their own version of Mechagodzilla when Godzilla ripped his head off. Unfortunately, what the Japanese had not considered was the fact that if one giant dinosaur destroying Tokyo was bad, throwing another into the ring was even worse. 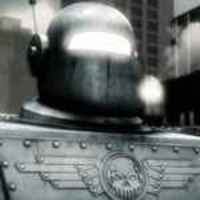 Giant Retrofuture Robots —  The zeppelin-filled New York City of Sky Captain and the World of Tomorrow is threatened by massive metal men in the full clanging glory of zesty retrofuturism. Even more implausible than their massive scale or the technological impossibility of creating autonomous giant robots in the 1930s? Their creator — the mad scientist Totenkopf — has been dead for over 20 years, dating  the creation of his giant robots to a time when even lightbulb technology was spotty at best. 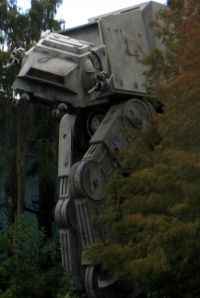 AT-ATs — Although impressive and intimidating as quadruped tanks, first debuting in The Empire Strikes Back, one can’t help but wonder why the Empire didn’t invest money in a military technology that couldn’t be disabled by a jump rope tautly strung between two trees. This goes double for the AT-AT’s little brother war machine, the AT-ST, which proved curiously vulnerable to attacks by extra-terrestrial teddy bears.