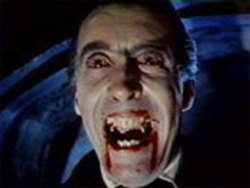 No big surprise here. What else could we pick?

Fangs, first and foremost, are REVEALED. Monsters (like Lon Chaney Jr.’s Wolfman) whose fangs are visible all the time have a distinct disadvantage over vampires in this department, because their fangs can never take on that (to state things baldly) sexual charge that the vampire fang, suddenly and surprisingly revealed, always carries.

Bela Lugosi built this car from the tires up, of course, but all the same, my feeling is that Christopher Lee managed to take the suddenly revealed fang-face a step further. When Lee bared his teeth in the Hammer Dracula films, he did so with an authority so convincingly elemental that you just knew that, whatever he may have said to the contrary, even Peter Cushing took his hat off to him a little bit. Lee, in these films, was an animal in human clothing, and when his true identity was revealed he had a way of reveling in this fact – going in a moment from secret monster to showboat – that makes him, for me, the most definitively charismatic monster in cinema.

That sudden, prideful fang-face of Lee’s is echoed in all kinds of later horror films, but the most interesting reappearance of it, to my mind, occurs in the scene in The Exorcist when the possessed Regan reveals her true demonic colors to the house-calling medical team. Regan makes an expression in this scene (fangless, it’s true) that is pure channeled Christopher Lee.

Biggest waste of fang-plastic in a horror movie? I hate to pick on Michael Landon, but I’d have to nominate I Was a Teenage Werewolf. Cover those things up! They’re so un-scary they’re positively indecent.