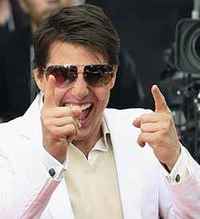 It looks rather obvious right now that until Star Trek XI is fully casted, a lot of this summer’s sci-fi news is going to be generated by rumors and speculations on which up-and-coming actors are going to be chosen to portray the larval forms of the crew of the USS Enterprise.

Two new casting rumors today then: the Hollywood Reporter is claiming that Abrams has found his Young Checkov, and it is Russian-born actor Anton Yelchin, star of Alpha Dog and Charlie Bartlett. He doesn’t much look like Checkov, but being Russian, I’m sure he’s qualified to ape Checkov’s number one identifying characteristic: the pronunciation of v’s as w’s.

The bigger news is that Abrams is apparently trying to woo Tom Cruise in a cameo role as the Enterprise’s first captain, Christopher Pike. Apparently Abrams and Cruise buddied up during the production of Mission Impossible 3. Lending some credence to the rumor is the fact that Cruise has been rumored before as being interested in an appearance in the next Trek film.

I have to admit, for all his goofiness and couch-jumping insanity, I thinK Cruise is pretty perfect for Pike, especially if his role is limited to a boyish grin and a handshake with Kirk when he hands over the bridge. As for the rest of the cast, who knows? I’m still keeping my fingers crossed for Matt Damon as Kirk, and Halle Berry wouldn’t go amiss as Uhura for me.