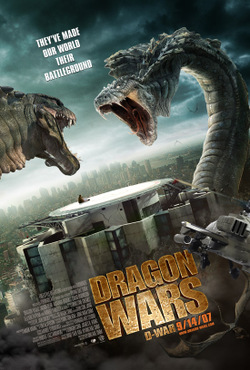 What’s big, scaly, breathes fire, destroys downtown Los Angeles and is also South Korea’s #1 movie?  That would be D-War, the most expensive film in Korean history and now one of their top ten box office hits of all time — after only two weeks in release!  Must be good, right?

Well, word of mouth isn’t exactly what the filmmakers might hope, but it seems that the film has become a source of local pride, that a South Korean filmmaker can make a big FX movie just as silly as the Americans for less money.  It’s not The Host, but folks over there don’t seem to mind, as over six million ticket-holders (that’s about 1/3 the population of South Korea) have already plunked down their hard-earned won (South Korea’s currency) in order to see it.

D-War has been now re-titled Dragon Wars for the U.S. and the primarily English-language film (it stars The Grudge‘s Jason Behr and the great Robert Forster) will open here on September 14.  This, along with whatever it is J.J. Abrams is cooking up for January, is making it a good time to be a giant monster movie fan again.  In a sense, it almost doesn’t matter if Dragon Wars is any good, as long as it’s fun and we get to see a lot of stuff get smashed up real good.  Considering it’s L.A. that gets it this time, I can’t wait to see this.