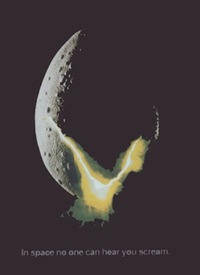 Chris Weigant has posted a lengthy thesis over at his blog, laying out for Hollywood the four scientific laws that film makers consistently ignore, and which he feels should be addressed: space is soundless, ships can’t come to a complete stop in space easily, laser blasts should be invisible and communication lag time in space.

It’s hard for me to understand how Hollywood closely adhering to physics in space is going to necessarily make better shows or films, especially when adopted on an industry wide scale (as Chris is suggesting).

For example, one thing Hollywood gets wrong is the ability for ships to stop in space, or make U-Turns, easily. Don’t get me wrong: I can see Chris’ excitement in seeing what would largely be the equivalent of sail or submarine warfare in space. That would certainly be a tense, wonderful device, as ships glide past each other imprecisely, unable to stop to get the exact fix they need to attack one another. But if every show was like that, it would just be scientific dogma, at the sake of innovation. And it would lose all dramatic import.

Chris’ other suggestions are either similarly decent ideas that would make fine devices on one or two shows, but not all of them, or they are just ideas that don’t connect. For example, I don’t care that I can see blaster bolts in sci-fi movies and shows, because blaster bolts look cool, regardless of their scientific plausibility.