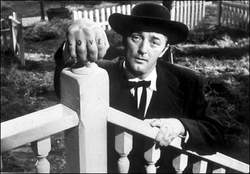 Come again? you might be thinking. But yes, I’m serious. All good horror movies have – hidden away or right there on the surface – a moral center.

Usually, of course, you have to dig a little to find it. Locating the essentially decent core sensibility in a film like, say, Hostel II, takes work. On the surface it just looks like one big gratuitous binge of decency-free nastiness.

But it’s not. Like every good descent film (the descent here being into the nightmare/hell world that’s the basis of our most elemental fears), both Hostel films feature heroes and heroines outfitted with a solid – if perhaps erratically displayed – sense of right and wrong. That basic moral sense creates a set of coordinates by which we can measure just how far into the nightmare/hell-world they – and we along with them — have gone. (The more freaked-out the basically decent Paxton gets by all the horrible people and situations he encounters, the more freaked-out we get along with him. But because he’s there as a protagonist, we never quite forget the fact that somewhere there’s a world where things actually do make sense, even if it’s long been left behind.)

The single scariest thing about the nightmare world is that it’s not only evil but… illogical. “What’s happening?” “What the f___ is going on?” Horror films are always full of lines like this, because the real job of these films is to take us on a controlled trip into the non-sense-making nightmare world, and for this trip to be effective you have to have protagonists who are outfitted with a basic sense of sanity. If there’s no one around to notice that we’re in hell, the whole place loses a lot of its punch.

Of course, whether the protagonists of these films make it back from their journeys with that sense intact is another matter. In ancient shamanic initiations – which like horror movies were basically journeys into the topsy-turvy world that lies underneath our ordinary daytime landscape – it was often understood that there was a real danger that the descent would drive you crazy. And going crazy – losing your sense of up and down and good and bad – is really the worst fate that the hero or heroine of a horror film can suffer. (To cite one of my usual examples, look at crazed, blood-smeared, maniacally laughing Sally on the back of that truck at the end of The Texas Chainsaw Massacre. Against all odds she’s made it out of the hell house in one piece, but it appears that she may have left most of her wits back there inside it. Or look at Naomi Watts at the end of the first installment of The Ring. She made it out of hell too – but with her moral sense, and hence her essential humanity, fatally corrupted by what she encountered there.)

This isn’t to say, of course, that all horror movies run by these rules. Plenty just dump a bucket of gore and grime on your head without providing any orienting set of moral coordinates at all. But… the good ones never do.

Never? Yeah, I’m pretty sure never. But this is the internet, so if anyone thinks I’m wrong just let me know.