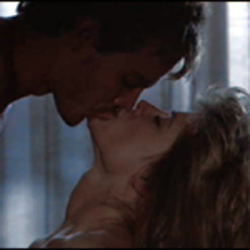 It sounds like Rosemary’s Baby on steroids.  The Hollywood Reporter has news of Intrepid’s The Fourth Horseman, which centers "on a young priest sent by his church’s secret order to kill a teenage
girl. She is believed to be the future mother of the Fourth Horseman of
the Apocalypse, destined to join siblings War, Pestilence and Famine in
destroying the world. But when the priest becomes romantically involved
with his target and she becomes pregnant, he’s forced to face the
possibility that he may have spawned the child from hell."

Cinematical offers up a bit more in the way of analogy, saying, "(T)he best part, which also parallels the plot of The Terminator (in
which the baby-to-be was a future good guy), is that the young priest
falls in love with the teen and, of course, impregnates her. Seems like
he really paid attention when studying for the priesthood; his seminary
school must have forgotten to stress the part about not sleeping with
teenage girls and spawning evil forces of destruction."  I like the idea of the girl giving birth to death.  But Intrepid also gave us The Hitcher, which wasn’t all that.

Who do you think should play that all-important teen girl?  Evan Rachel Wood? Emma Watson? Who?