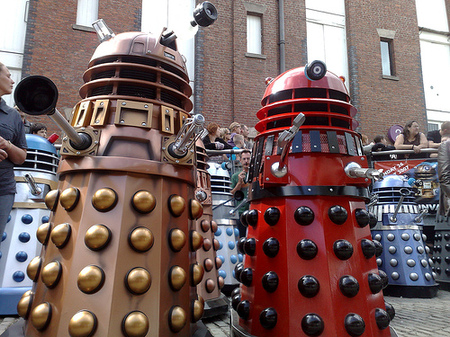 Intending on hollowing out our planet’s core and replacing it with a star drive, 67 Daleks directed their laser-shooting toilet plungers in the direction of Manchester’s Museum of Science and Industry.

Unfortunately, by dint of the fact that they weren’t really Daleks, but porky Doctor Who nerds crammed into cardboard, Dalek-shaped sarcophagi, they failed their mission: the Earth will not go hurtling into the sun. However, they probably have managed to achieve their secondary goal: the Guinness World Record for Most People Dressed Up As Daleks in One Location. The previous record? Held by our lonely teenagers, Halloween Night, Bristol, 1984.

I’m being sarcastic… I kid. I have a great deal of appreciation for anyone who so aggressively and enthusiastically broadcasts their geekdom for the entire world to see. 67 Daleks is way more than I thought would actually turn up. Check out the Flickr gallery for a wealth of images: it’s pretty great.